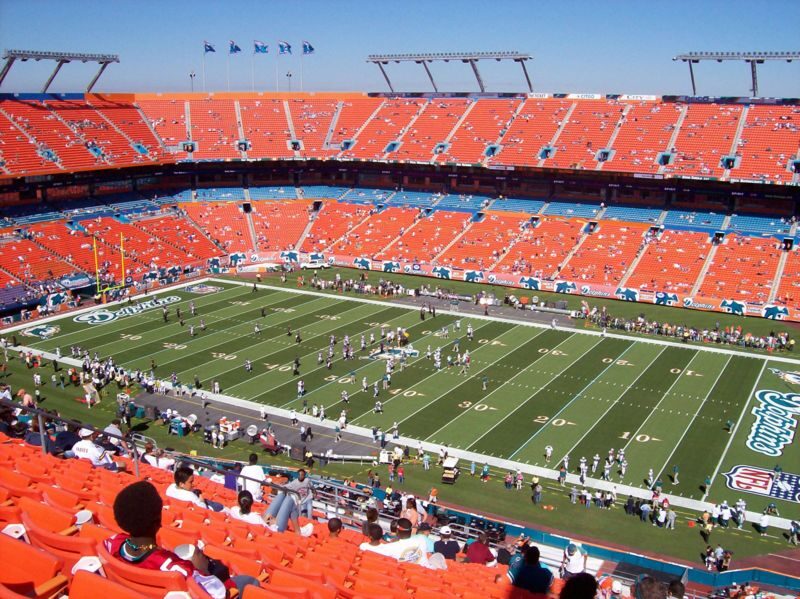 Dolphin Stadium , Miami Florida (previously known as Joe Robbie Stadium, Pro Player Park, Pro Player Stadium, and Dolphins Stadium) is a football, lacrosse, soccer and baseball stadium in Opa-Locka, Florida, a suburb north of Miami. The stadium serves as host to both the Miami Dolphins and the Florida Marlins.

Since its construction, there have been four Super Bowls (XXIII, XXIX, XXXIII, XLI) and two World Series (’97 and ’03) played in the stadium. The stadium will serve as host for Super Bowl XLIV in 2010.

Dolphin Stadium was the first of its kind to be constructed entirely with private funds. Joe Robbie led the financing campaign to build Joe Robbie Stadium (JRS) for the Miami Dolphins of the NFL. JRS revolutionized the economics of professional sports when it opened in 1987. Inclusion of a Club Level, along with Executive Suites, helped to finance the construction of the stadium. Season ticket holders committed to long term agreements and in return they received first-class amenities in a state-of-the-art facility which is still used as a model for new facilities across the country.

The stadium was designed at Joe Robbie’s request to have a wider than normal playing field in order to accommodate soccer and to serve as the home of a potential Major League Baseball franchise in South Florida. Because of this design decision, the first row of seats is 90 feet (27 meters) from the sideline in a football configuration, considerably more distant than the first row of seats in most football stadiums (the closest seats at the new Soldier Field, for instance, are 55 feet (17 meters) from the sideline at the 50-yard line). While the decision to employ a wider playing field resulted in a National League expansion franchise for Miami (see below), it resulted in a less intimate venue for football when compared to other contemporary football facilities.

In 1990, H. Wayne Huizenga, then Chairman of the Board and CEO of Blockbuster Video and Huizenga Holdings Inc., agreed to purchase 50 percent of Joe Robbie Stadium and became the point man in the drive to bring Major League Baseball to South Florida. That effort was rewarded in July 1991, when South Florida was awarded a National League expansion franchise. On January 24, 1994, Huizenga acquired the remaining fifty percent of the stadium to give him 100% ownership. Since 1991, several million dollars have been spent to upgrade and renovate the stadium.

The stadium has been home to the Miami Dolphins since 1987 and to the Florida Marlins since 1993. However, stadium management has indicated that the Marlins must find a new venue by the end of their current lease. It has been the site of the FedEx Orange Bowl game since 1996, except for the January 1999 contest between Florida and Syracuse, which had to be moved due to a conflict with a Dolphins playoff game. Dolphin Stadium has played host to four Super Bowls in 1989, 1995, 1999, and 2007, with another scheduled in 2010, two World Series (1997 and 2003), and numerous concerts, featuring entertainers such as U2, The Rolling Stones, Pink Floyd, Elton John, Billy Joel, Chicago, Genesis, Gloria Estefan, Guns N’ Roses, The Who, Hall & Oates, Rod Stewart, Paul McCartney, and The Three Tenors.

Dolphin Stadium has been home to many commercials and feature films as well, including Ace Ventura: Pet Detective, the football-themed movie, Any Given Sunday, starring Al Pacino, Cameron Diaz and Jamie Foxx and an episode of The Simpsons called “Sunday, Cruddy Sunday”, where Homer and his friends visit the stadium for the Super Bowl.

Stadium Renovations for the Florida Marlins

Behind the scenes, the facility underwent $100 million in renovations to accommodate Major League Baseball and the Florida Marlins before the 1993 season. The conversion included the installation of retractable seating on the north side of the stadium (with the stands that were removed installed as seating at the Dolphins training camp facility), the construction of the baseball press box in the southwest corner of the facility, the building of the baseball dugouts, the addition of 660 new lights for suitable night play and the installation of a hydraulic disappearing pitcher’s mound. The stadium also features a synthetic warning track designed to absorb water. At the time, the only other facility to feature this type of track was Oriole Park at Camden Yards, home of the Baltimore Orioles. The renovation also included the construction of the Florida Marlins clubhouse and other amenities to accommodate baseball at the stadium.

The stadium’s capacity for baseball was reduced to just over 47,600 seats. Even without the Marlins’ desire for a more intimate atmosphere, most of the upper-deck outfield seats would have been too far from the field. The stadium’s baseball capacity has been reduced even further in recent years, and it now seats just over 36,500. However, for the two times (1997 and 2003) the stadium has hosted the World Series, the 400 section in the outfield was uncovered, giving the Marlins an average attendance of over 66,000 for those seven home games.

Because of the need to fit a football field in the stadium, the field of play is larger than in most other new baseball stadiums. The 33-foot (10-meter) tall left field fence, nicknamed the “Teal Tower” further limits the ability of players to hit home runs. Foul territory is also fairly large in comparison with most new stadiums.

Since winning the World Series in 1997, Marlins’ management has regularly argued that the stadium is insufficient to host a MLB team on a regular basis, largely due to the fact that current team management does not own any part of Dolphin Stadium (owned by Huizenga), and therefore are not able to take in any money from parking, concessions or the like. The Marlins also ran into problems during the 2003 World Series when the turf conversion between the Marlins and Dolphins games provided an unsteady playing surface for football. Also, most believe a retractable dome is needed to prevent rain-outs. The stadium did not prevent the team from winning a second world championship in 2003, however.

On the field, the stadium is equipped with a Prescription Athletic Turf (PAT) system which provides draining for its natural grass. At a cost of $1 million, the system ensures a firm, dry playing surface within half an hour’s time after as much as a three inches per hour rain fall.

On August 26, 1996, Pro Player, the sports apparel division of Fruit of the Loom, sponsored the renaming of Joe Robbie Stadium as Pro Player Park, and shortly after Pro Player Stadium. Pro Player, which specialized in licensed sports apparel, became the first sports marketing and products company to entitle a stadium or arena with their ten year, $20 million deal. This sparked a controversy in South Florida, as Joe Robbie had spent millions out of his own pocket after the city and the state refused to fund a new stadium for the Dolphins and many Miamians believed his name should remain on the stadium. Many people, including Florida-based sportscaster Hank Goldberg refer to it as “The Stadium Formerly Known as Joe Robbie” out of protest of the name. Pro Player filed for bankruptcy in 1999, but the name remained until 2005, when their contract expired.

On January 10 of that year, Huizenga announced a $300 million 3 phase renovation of Dolphins Stadium to add a club level and luxury suites, new scoreboards, additional parking, and eventually a dome or retractable roof [1]. Daktronics has installed one of the largest HDTV-ready video system in the United States in both end zones that were completed by the Marlins’ home opener on April 11, 2006 as well as the world’s longest full-color ribbon boards which were completed in July of that year.

On April 5, 2006, it was reported in both The Miami Herald and the South Florida Sun-Sentinel that on April 8, 2006, the “s” would be dropped from the stadium name and revert back to the original “Dolphin Stadium” name along with a new logo. This renaming is part of a national branding campaign that concluded with Super Bowl XLI on February 4, 2007.

Relevant facts about the Dolphin Stadium in Miami, Florida