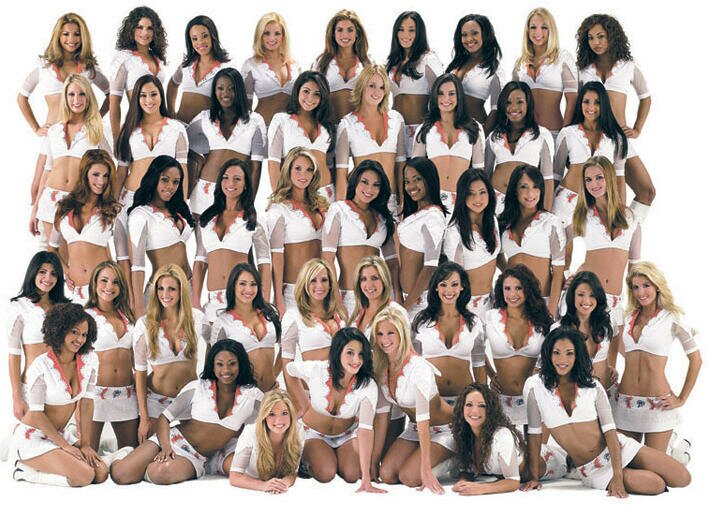 The Miami Dolphins inaugural season was in 1966, which also marked the beginning of cheerleaders on the sidelines at the Dolphins home games at the Orange Bowl. The first Dolphins cheerleading squad, known as the Dolphin Dolls, consisted of 125 girls ranging in age from 8 to 18. Of the 125 members, 48 were chosen each week to perform on the sidelines while the remaining cheered from their seats in the endzone bleachers. The Dolphin Dolls, under the direction of Bill Allen, cheered at the Dolphins games until 1977.

In 1978, Joe Robbie, owner of the Miami Dolphins, decided to make his own changes regarding the image of the professional cheerleaders with the creation of the Dolphin Starbrites. This group of 30 leggy ladies were chosen out of over 300 women who auditioned to cheer at the Miami Dolphins games. These new cheerleaders were under the direction of the famous June Taylor. Though the name June Taylor is most associated with Jackie Gleason, Taylor made her television debut in 1948 on The Toast of the Town starring Ed Sullivan. In 1950, she became a household name when she joined the Cavalcade of Stars with Gleason. She is most noted for her choreography of the June Taylor Dancers on the Jackie Gleason TV Show which ran for almost 2 decades (1952-59 and 1962-70). In 1954 June received an Emmy Award for television excellence.

The first Dolphin Starbrites wore one-piece bathing suits and go-go boots. They cheered and danced on a stage in the east endzone of the Orange Bowl and put on spectacular Broadway-style half-time shows to music played by a 22 piece brass band.

It was not until 1990, when June Taylor retired and Kathy Morton Shashaty took over as director and choreographer, that the cheerleaders updated their uniforms and started wearing sneakers on the sidelines. Shashaty was a Dolphins Cheerleader from 1981 to ’85, and served as assistant choreographer for the squad four years prior to replacing June Taylor.

In 1994, the purchase of the Miami Dolphins by Wayne Huizenga brought about changes to the Miami Dolphins Cheerleaders. A co-ed stunting and collegiate-style cheerleading squad was debuted at Joe Robbie Stadium on the first pre-season game.

The 1996 season marked a new era for the Miami Dolphins, Jimmy Johnson took over as Head Coach of the team, Joe Robbie Stadium became known as Pro Player Stadium and Dorie Braddy (now Grogan), a former 5-year veteran of the Dallas Cowboys Cheerleaders, was recruited to direct and glamorize the Miami Dolphins Cheerleaders.

Cheerleader Auditions
To audition for the Miami Dolphins Cheerleaders, you must be at least 18 years of age and attend school or work full-time. Cheerleaders typically range in age from 18-35 and have included: attorneys, teachers, nurses, realtors, marketing coordinators and even mothers.

Auditions are held every spring and consist of four phases:

Phase 1 — Preliminary Auditions which consist of free-style dancing. Phase 2 — Semi-Finals – Dance and Kickline taught to those selected from the Preliminary phase. Phase 3 — Final Round Dance Clinics and Interviews – those selected to the Finals are taught a new dance routine which they are to perform at Final Auditions Phase 4 — Final Auditions – All finalists along with returning cheerleaders compete in this phase. A one minute individual talent presentation and performance of the dance and kick routine taught during dance clinics is performed.

Those selected to be a Miami Dolphins Cheerleader have the opportunity to not only be a part of the Miami Dolphins Organization and the NFL, but to create friendships that will last a lifetime. They are part of a group of young women who touch each others lives, learn about life and working together and have a chance to reach out and touch the hearts of those they come into contact with. The blend of personalities lends to the creation of a well-rounded and unique squad.

It takes dedication, determination, and discipline to become a cheerleader. The cheerleaders rehearse 3-4 nights a week for 3-4 hours a night all year long. All rehearsals are mandatory. In addition to performing at all Miami Dolphins home games, the cheerleaders appear at special events, grand openings, corporate meetings, conventions, trade shows, state and county fairs, other sporting events and many other promotional functions. They also have a travel squad consisting of 10-12 selected ladies who are a part of the Miami Dolphins Cheerleaders “Show Team”. The “Show Team” has traveled throughout the United States and across the globe performing their 30-minute “Broadway Style” show. The show consists of singing, dancing, audience participation and costumed stage production numbers. The “Show Team” appearances have included: Walt Disney World, Universal Studios, MTV Music Video Awards, Austria, Japan, Mexico City, visiting troops in the Middle East, Cayman Islands, Monte Carlo, France, Canada, and the Bahamas

Since 1997, the Miami Dolphins Cheerleaders have traveled to exotic resorts to shoot their annual Swimsuit Calendar. They have traveled to such locations as San Juan, Puerto Rico, St. Thomas, Virgin Islands, St. Maarten, the Bahamas, the Florida Keys and in their own back yard on South Beach.

The millennium had marked the debut of a new look for the cheerleaders. The athletic look was replaced with a sleek, classy and sexy style. The uniform color was changed from predominately aqua to white and the original Go-Go boots had returned.

The 2004 swimsuit calendar shoot took place in the Florida Keys. For the first time in Miami Dolphins Cheerleader History, the calendar features players from the Miami Dolphins football team.

The 2005 season will reveal a “new look” for the Miami Dolphins Cheerleaders both on and off the field. Behind the scenes the cheerleaders have made some leadership changes, they are now under the direction of Heather Phillips and Emily Newton. Heather, the new Director of Cheerleaders, comes to us from Channel 10 where she was an Entertainment/Sports Feature Reporter. You probably remember her from the sidelines; she was a Dolphins Cheerleader for 3 years and served as one of the Captains on the squad. Emily is a former Dallas Cowboys Cheerleader who has taken over the position of Cheerleader Coordinator. Also new to the staff and producing exciting performances will be the job of Trisia Brown, who has taken over the role of Cheerleader Choreographer. Trisia was a Miami Dolphins Cheerleader for 4 years and has trained with professional dance instructors in Los Angles, Miami and New York.

The job of a Miami Dolphins Cheerleader is to be a lady at all times, to be gracious and kind to those she comes into contact with and to support and uphold the impeccable image of the Miami Dolphins organization.